They were not treated fairly. In the text, it stated that Sarah was beaten by the master’s wife. It said his wife was a mean spirited woman who beat me for the smallest mistakes.” The article stated, ‘’My clothes became ragged and my belly was never full’’. ‘’Robert survived the heat and the disease that was going around while many other servants didn’t.”

Some kids were kidnapped and forced to indentured servitude. One of those kid’s name is Robert. In the article it stated ‘’One terrible night, two men grabbed me and told me I was going to Virginia, like it or not’’. In the text, it said ‘’The men said that children like me were a disgrace to London that our city was filled with orphans begging and stealing on the streets’’.

However, some kids willingly signed up to go to Jamestown. According to the article, Sarah’s family was poor and she has offered her a trip to America. In the article, it said ‘’ In London my family was poor. One day in 1622, when I was 14, a man offered me a chance to sail to America’’. The man in the article said ‘’America is the land of opportunity for a poor girl like you, Just work a few years in Virginia to pay for your passage on the ship, and then you’ll be free to make your own life.”

December is my favorite month of all the months because  in December its Christmas. Christmas eve and it’s my birthday on December 26 . On Christmas eve my family goes out and beyond we have Posole, Tamales, Menudo, Chicken, and Tacos. I love December. 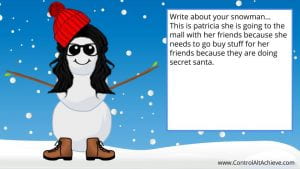 Being a Mexican is hard. Your parents make you work 24/7. It is fun as well because you eat a lot of food when I say a lot I mean a lot of food. There’s tacos, beans, rice, candy, chicken and Family lots of Family. Sometimes I even forget some of my aunt’s and uncle’s names. When you have a party there is always a different type of person there are all the kids running around that one aunt live streaming in facebook and the aunt that over dresses. Oh, and the moms chatting like for hours. I love my culture and my Family 💯❤

Welcome to your brand new blog at Edublogs!

To get started, simply visit your blog’s dashboard, edit or delete this post and check out all the other options available to you.

We can walk you through step-by-step in our guide to getting started with your blog.